4K is one of the latest tech buzzwords in consumer electronics. TV marketing now stresses to customers 4K resolution with new models. So how does 4K content pertain to our Orlando video production company and clients?As a business you see and hear the talk about 4K video content and wonder “Do we need 4K content?” That’s why we came up with the idea of writing a blog post that will explain to you why we do not think you need 4K content for video marketing. 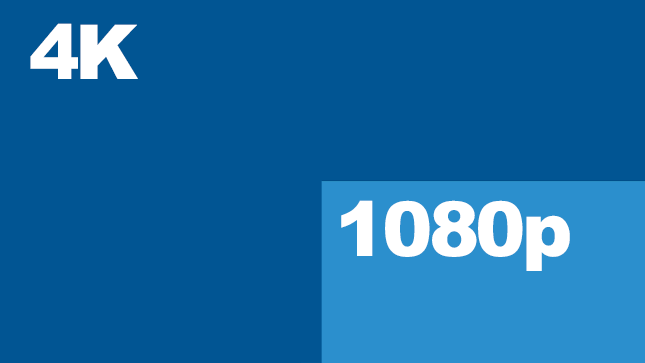 4K, also known as UHD or Ultra HD refers to the horizontal resolution that has 4,000 lines of resolution. It is also referred to as a picture technology that is four times the number of pixels found in 1080p resolution. The 4K resolution for televisions, computer monitors, smartphones and tablets are 3840 x 2160 (2160p). 4K content at the moment is most popular with some of the best streaming services such as Netflix, Amazon Video, Hulu, and Vudu. You can also access 4K video content via Ultra HD Blu-ray if you have a 4K Blu-ray player like the Sony UBP-X800. A lot of technical jargon right? Well, I wouldn’t worry about that because here’s a small nugget for you. According to Snell Advanced Media, more than 60 percent of Americans still don’t understand 4K. Not a big deal if this is confusion to you. Do we need 4K content to operate our Orlando video production company? Yes and no. But for this blog post, we’re speaking to individuals that want to reap the benefits of video marketing for business.

This might be the most important reason when you’re debating the “do we need 4K content for video marketing” question. To be blunt with you. Most people really can’t tell the difference between 1080p and 4K video content. This might seem weird, but many still cannot distinguish the difference between 480p and 1080p. With 4K TV’s the screen needs to be larger and you need to be closer to it to even notice the difference. Without getting too technical about this, here’s an example. If you’re welcoming new employees with a promo video on a 40 inch TV, chances are the television isn’t capable of displaying 4K content. However, if it is, the new employees will not even be able to see the benefits of 4K video content unless they’re at a very close viewing distance. A 1080p HD video will be just fine.

Here’s another example. So you have your employees watch training videos online. Whether they watch the video on YouTube, Vimeo, or your website, this is the thing with 4K content. Most computer monitors right now are not 4K resolution. So watching that 4K video content is not going to be beneficial and it could play choppy depending on the strength of the computer. Also, you have to think about internet speeds. Will the internet speeds be fast enough to stream that 4K video content? With 1080p videos, you don’t have to worry about these potential complications.

4K video file sizes are incredibly large. It depends on the FPS (frames per second), bitrate, codec and compression. Here’s an example for you. 29 minutes of 4K video content from a previous corporate event we shot came up to be 19.8gb. Those same exact files in 1080p format file size is 8.42GB. You could have an hour of 1080p footage for less than half an hour of 4K video content. So with the larger file sizes of 4K content comes more equipment such as memory cards, compatible monitors, hard drives, and other backup materials. When it comes to 4K content and video editing, as mentioned before, the file sizes and the resolution will add hours onto the post production process. That will add to the cost of video production. Also, if the production company you work with charges hourly, well video editing rates per hour will most definitely add up when dealing with 4K content. We’re not saying that shooting in 1080p will cut video production costs down in half, but it will save a whole lot of time.

Say you contact a video production company and mention that you only need RAW footage and request it to be shot in 4K resolution. Depending on the production and how the files will be transferred, you could either be waiting a few days for files to upload to Dropbox or Google Drive. You could also end up buying more hard drives to contain the files. 4K video files are too large and they slow down productivity when transferring files. With 4K files, you’re losing precious drive storage.

For 4K content, a 2 min promo video we created for the CxEnergy 2017 Conference was optimized for YouTube exported to 562 MB’s (megabytes). That same promotional video exported to 1080p was 227 MB’s. Now imagine if we provided videography for a corporate event of yours and you wanted the final product to be a testimonial video, recap video, and speeches as separate files. Depending on the length of the speaker sessions, those files could excess 3 GB’s (gigabytes). When distributing those files to multiple people, it’s possible that it won’t be a simple task because you’re dealing with potential issues of people not being able to watch the video or download them due to the large file sizes.

As we said earlier, 4K resolution is one of those tech buzzwords right now. If you’re a company needing conference video production, there is absolutely no reason why our event videographers should shoot your speaker sessions in 4K resolution. Most of the people that will watch the videos are going to watch on YouTube, Vimeo, or your website. When they watch the video they will not care if it is 720p, 1080p, or 4K resolution. 720p or 1080p is perfectly fine to watch a speaker session that might last 30-60 minutes. As for our Orlando video production company, do we need 4k content to operate? Like we said before, yes and no! How 4K benefits videographers with certain video production projects such as aerial footage, interviews, television, sports, documentaries, and film is the best. The video editing benefits cannot be understated. However, for a company needing video content marketing? 4K video content isn’t really worth the extra hassle to market your business. Think about your target audience. Do you really need 4K content for a groundbreaking ceremony video that will be used for one of the social media networks? No. So to wrap this up with the original question, “do we need 4K content for video marketing?” No, you do not. You don’t need 4K video content to market your business. 1080p is perfectly fine and will be for the foreseeable future.